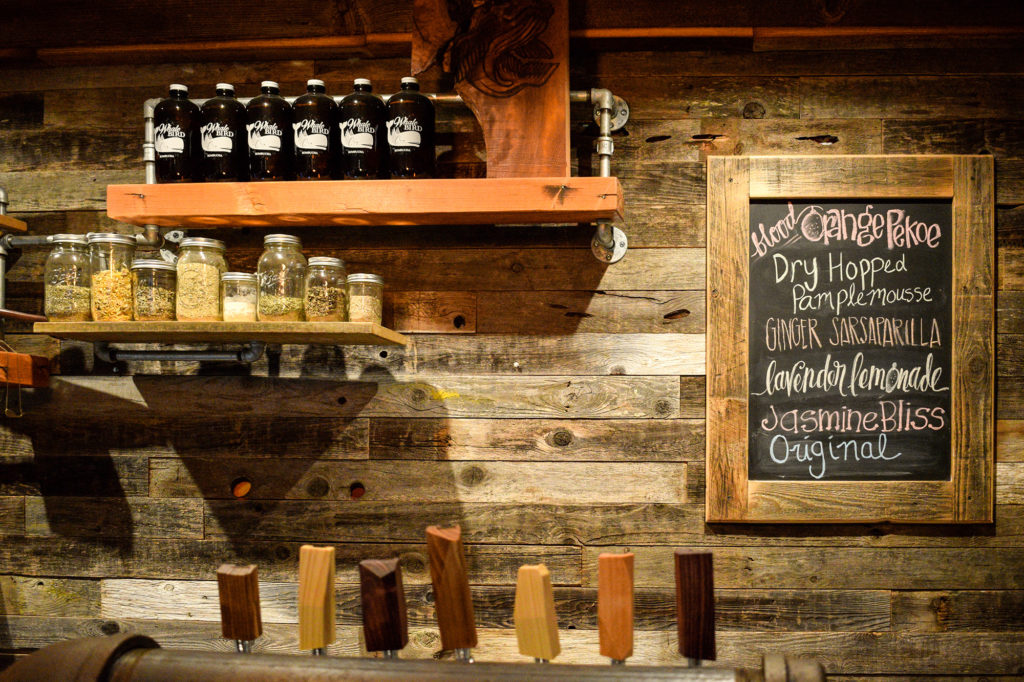 Molly Barker lifted what looked like a slippery tortilla out of a jar of pungent tan liquid. She smiled as the smell of vinegar filled the air and the slippery disk dripped like a jellyfish out of water. Barker placed it back in the jar and drained the liquid. She was making her own kombucha.

“It’s kind of like drinking beer for the first time,” agricultural systems management senior Barker said. “It just sort of grows on you. Now I’ve come to really enjoy the vinegary taste to it.”

Kombucha is a slightly vinegary fermented beverage made from brewed tea leaves. It has a low alcohol content (on average less than 0.5 percent) and bubbles lightly. Barker makes it using a symbiotic culture of bacteria and yeast (SCOBY), the jellyfish-like catalyst for making kombucha. She lovingly refers to “him” as “Scobes.”

Barker said the temperature is an important part of the brewing process, which involves making tea first, letting it cool and adding the SCOBY. Barker sometimes adds fruit to make different flavors of kombucha. Once all the ingredients are in, she keeps them in a jar out of the sun and lets the mixture ferment.

For those who don’t make their own kombucha, the drink can be found at many local vendors. Local brewery Whalebird Kombucha recently started selling its product at Whole Foods, Kreuzberg and even on campus at 19 Metro Express, located within the atrium of 19 Metro Station.

Founded in 2012, Whalebird Kombucha sits on the fringes of San Luis Obispo, nestled on the corner of Empleo Street, off of busy South Higuera Street. The scent of vinegar wafts from the distillery room as dark amber liquid ferments in 50-gallon vats. Ceiling-high steel vessels line the walls of a space just beyond a rustic front tasting room where an energetic college student serves samples to customers.

Up a neon green ladder is a loft space above Whalebird’s tasting room. A punching bag, colorful cartoon-style art and hanging-hammock chairs reflect a playful company culture. Here, CFO Jake Pritzlaff, with a curling moustache like a silent movie villain, told the story of Whalebird.

“You look at Whalebird and instantly it makes you feel happy. It’s this funny little whale with a little sideways smile kind of smirking at you,” Pritzlaff said. “Kombucha is kind of quirky; it’s two different things making a fermentation, it’s bacteria and yeast.”

Pritzlaff related this marriage of bacteria and yeast to the company’s brand.

“A whale and a bird are another two things that you wouldn’t think go together,” he said.

The drink originated in Asia hundreds of years ago, but has recently become more popular. Kombucha sales increased by 29 percent from 2013 to 2014, according to CNBC.

Whalebird CEO Mike Durighello began Whalebird’s predecessor, Komplete Kombucha, in 2012 with two other founders — Alex Narodny and Molly Hemler — who have since left the company. When Narodny left the company in 2012, Pritzlaff joined as the company’s analyst. Durighello and Pritzlaff became more serious about their kombucha brewery in 2015 after making $10,000 from a Kickstarter campaign.

“At that point in time, kombucha, was very niche. It was drank by people who were in the yoga scene, the health and wellness kind of industry, and it had a vibe of something that maybe hippies drank,” Pritzlaff said.

“We wanted to take it and make it something for people who were into craft beer, who were into soda, energy drinks, iced tea — that kind of thing,” Pritzlaff said. “We felt like we’d do some good in the world if they were picking up a kombucha instead.”

In 2015, Pritzlaff and Durighello rebranded from Komplete Kombucha to Whalebird.

With 30 vendors on the Central Coast alone, Whalebird is slowly dominating the local market for on-tap kombucha. Its distinguishing feature is that the product is never bottled, meaning it’s only available from a tap, like a keg of beer.

Spark Yoga in San Luis Obispo is one of Whalebird’s vendors. Owner Steph Young has been selling Whalebird for two-and-a-half years.

“Kombucha, the concept, when you talk about it,  sounds frightening and disgusting,” Young said. “But I’m a believer in it, I feel like it does help with your overall GI (gastrointestinal) health and it tastes good which is awesome.”

The good, the bad and the probiotics

Barker said there isn’t a lot of science that supports the benefits or negative effects of kombucha, so she doesn’t buy into the probiotic craze behind it.

“There’s cases of people who have died from home-brew because it grows some toxic mold and they didn’t realize it,” Barker said. “But there are some other people that say it’s cured AIDS. If it makes you feel good, you should drink it.”

Pritzlaff, however, thinks the bacteria in kombucha can be helpful in digestion and gut health.

“There’s a lot of research coming out on the nature of probiotics in general; so eating kimchi, sauerkraut, probiotic yogurt and drinking kombucha — they’re all part of a healthy balance of gut bacteria,” Pritzlaff said. “The more beneficial bacteria you’re putting in your gut, the better your digestion, which heavily influences your overall health and wellness.”

“The word biotics reminds us of something that is alive,” Nicholson said. “These are the bacteria that live alongside us. ‘Probiotic’ is the term that has come into use that just means these live microorganisms.”

Nicholson said each person has a different balance of bacteria in their body and the intake of different probiotics can either help that balance or throw it off.

“If we have them in the right amount, we get a health benefit,” Nicholson said. “When you have ‘bacterial overgrowth’ where you get too much of one type of food substrate, then they kind of get out of balance and out of wack in your system.”

Barker said she only drinks a maximum of one glass a day because if she drinks too much, it could make her stomach hurt. But agricultural communication junior Alissa Loftus said she has a different experience.

“I like to drink it whenever my stomach feels off or especially whenever I have to take antibiotics,” Loftus said. “All the good bacteria in there is basically the equivalent of taking a probiotic pill.”