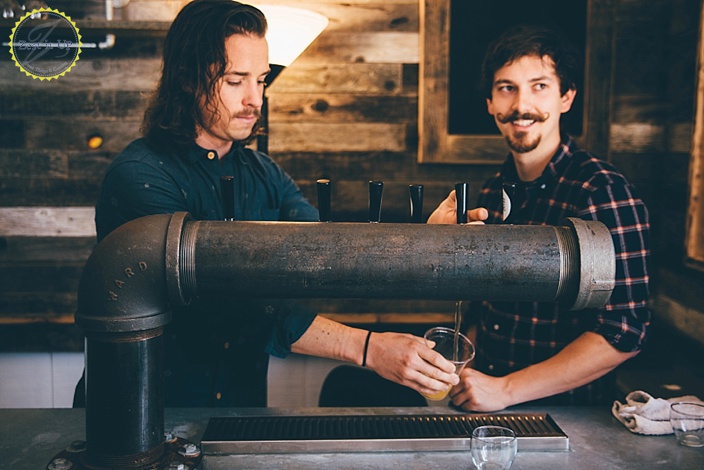 The first time Mike Durighello tried kombucha, he didn’t like it. His friend had handed him the fermented tea-based probiotic drink after a day of surfing along the Central Coast. Durighello was unimpressed.

“It tasted bad,” he told the Sun. But there was a reason. “I wasn’t familiar with the world of fermentation and what fermented foods tasted like.”

Durighello soon learned to love the drink and began to take it with him to the library while he studied in college at UC Santa Cruz. “It would curb my appetite, give me laser focus, and all of the sudden I would look up and three hours had gone by,” he said. “It definitely felt good.”

From that point on, Durighello estimates he drank two bottles of kombucha a day, “which is a really expensive habit. Especially at the time I was buying it,” he added. “There weren’t a lot of brands around.”

And then he got to thinking, why not make his own?

The first batch of kombucha Durighello brewed was with some friends. The initial results were disappointing.

“It wasn’t great,” he admitted. “It wasn’t that it was bad; we just knew we had a long road ahead of us. We didn’t know what we were doing. We had a recipe. We had a general idea, but there’s a million different ways you can make kombucha. There’s not one ‘holy grail’ way to make it.”

And that’s a philosophy San Luis Obispo’s Whalebird Kombucha, of which Durighello is CEO and founder, appears to take to heart. Currently, the brewer offers a variety of flavors, including “Jasmine Bliss” (described as “fruit forward” and “floral” with “hibiscus and rose hips” that “bring balance to currants and raisins”), “Dry-Hopped Pamplemousse” (a French style grapefruit “with hints of cascade and citra hops”), and a purple colored, CBD-infused iteration dubbed “Purple Rain.”

Durighello said the company brews between 6,000 and 7,000 gallons of kombucha a month. The process is fairly straightforward: Workers brew a tea and then create a concentrate with tea and sugar. They then add the liquid to fermenters and cut it with water.

“So you have a giant vat of sweet tea, and then we add our kombucha culture to it,” Durighello explained. “That initiates the fermentation process when you inoculate the sweet tea with your yeast and bacteria strains and then it ferments. From there, we transfer it to our post-fermentation tanks, which is where we do all of our carbonating, chilling, and flavoring. Then it goes into kegs and it’s ready to be served.”

Whalebird is currently only available to be purchased off location from where it’s brewed (except for those enrolled in the company’s Growler Club, which can get growlers filled on Mondays and Wednesdays from 4 p.m. to 7:30 p.m. in San Luis Obispo). Durighello said the brewery’s main customers are largely restaurants, coffee shops, cafes, and grocery stores.

The company recently made a deal with Lassens Natural Food and Vitamins, and the health chain currently has Whalebird stocked at its Santa Maria location (1790 S. Broadway). Whalebird also has a booth at San Luis Obispo’s farmers’ market each Thursday.

Durighello said there are plans to launch a new website in late September of this year that will have additional details on where to find and buy Whalebird kombucha in stores from the Central Coast down to Los Angeles.

According to Durighello, the rising popularity of kombucha is making the industry evolve in a way similar to the craft beer industry a decade ago. And one of the key features of that growth and change is individuality and catering to different drinkers’ preferences.

“It’s why I think so many people are falling in love with kombucha beside the probiotic content. It’s got a really nice balance to it.”

Staff Writer Spencer Cole wrote this week’s Biz Spotlight. Information should be sent to the Sun via fax, mail, or email at spotlight@santamariasun.com.